Name: Charmian Chen
Height: 161 cm
Weight: 46 kg
About: Charmian Chen, a 22-years old student and model from Taiwan, was on a holiday visiting the Sacred Monkey Forest Ubud in Bali when two monkeys decided she was a little overdressed and pulled her dress down. This embarrassing incident made Charmian a global star! Who would have thought that monkeys can make someone famous? These monkeys are truly “sacred”! Charmian attracts the attention of the primates when she was feeding them with corns. A piece of corn apparently had fallen into Charmian’s dress and these monkeys decided to go for it. One of the monkey managed to pull Charmian’s tube dress down and caused her a wardrobe malfunction! Red-faced Charmian naturally tried to cover her exposed self as best she could with her hands. And because of these embarrassed event’s pictures, it became an international headline appearing on blog sites, forums and news portals across the world including her native country Taiwan, with TV stations asking her to appear and talk about it. I’m not sure if these cheeky monkeys were really after the fallen corn or were they going for the “peaches“. She said, “I was on holiday and at first the pictures were just funny, but when I got back to Taiwan I had all these people trying to add me as friends on Facebook. I thought that’s a bit strange. One of them said they’d seen the pictures and I was really surprised and the next thing I knew I had TV stations ringing me.”

Charmian added, “I was on vacation then in Bali so I didn’t mind it, but back in Taiwan I am still studying so I didn’t want to become famous just for my boobs. But actually it has been fun, people do come up to me and say, “You’re the monkey girl!” and it made me laugh.”. 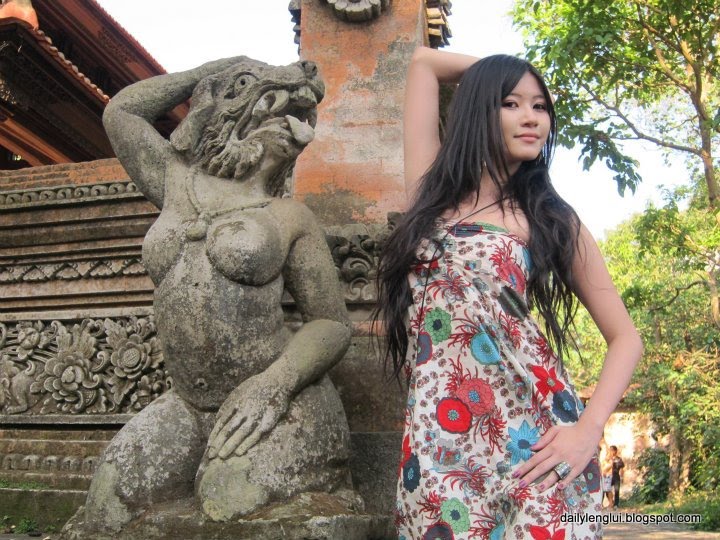 “The monkeys, as well as being hungry, were also attracted to bikinis worn by many visitors. I think when they took my top down it was because of the corn and the park staffs warned the visitors that bright bikinis worn under dresses do attract the monkeys. I think it’s the bright colours which they think might be fruit, well I don’t know about that but it was very strange at the time.”, added by Charmian.

Real pure coincidence “thankfully” to these naughty monkeys? Or was it staged? Let’s look at some of the Netizens comments:

Charmian: I dont need this to promote my modeling career since im not a runway or magazine model. I am a figure model who works in unis or studios for students or artists. It wasnt a set up. I am glad its a fun pic tho. I am flattered.

Helen: I would give her the benefit of the doubt, but………………how would corn fall down the top of that dress which was pretty tight-fitting around the top and her hands (holding corn) would have not reason to be that high up her body!! Don’t think so my dear, but it makes a good picture.

Juan: Who cares whether it was set up. A beautiful woman makes my day every time…

Ade: she just happens to me a Model – what a convenient coincidence!

Stephaine: Obviously the Taiwanese woman staged this to happen. I’ll head straight to the park and let the squirrels do the same. Let’s see if I’d get on the news. Of course not. Mike: I’ve been there and we never had any monkeys climbing all over us and didn’t see them climbing over anyone else for that matter. Look in the background the other tourists don’t have monkeys all over them and thats how it is. This is a set up.

Paul Taylor: at least the Monkey has good taste. had it been a typical British lass the monkey would have offered her a bathrobe

Lee, Bradford: I wanna be a monkey 🙁

Cynical me: Neither Ms Chen OR the person filming tried VERY hard to actually STOP the macaques did they??

Anyway, only the best of Charmian Chen and the monkeys available here, all filtered by http://www.asianscandal.net/
Source: Daily Mail